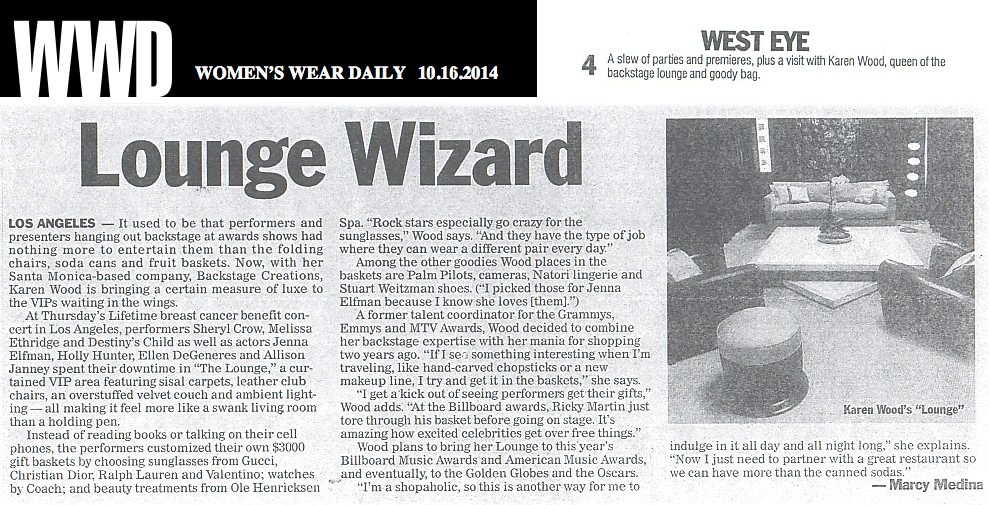 Backstage Gifting Lounge/Los Angeles — It used to be that performers and presenters hanging out backstage at award shows had nothing more to entertain them than the folding chairs, soda cans and fruit baskets. Now, with her Santa Monica-based company, Backstage Creations, Karen Wood is bringing a certian measure of luxe to the VIPs waiting in the wings.

At Thursday’s Lifetime breast cancer benefit concert in Los Angeles, performers Sheryl Crow, Melissa Ethridge and Destiny’s Child as well as actors Jenna Elfman, Holly Hunter, Ellen DeGeneres and Allison Janney spent their downtime in “The Lounge,” a curtained VIP area featuring sisal carpets, leather club chairs, an overstuffed velvet couch and ambient lighting — all making it feel more like a swank living room than a holding pen.
Instead of reading books or talking on their cell phones, the performers customized their own, $3000 gift baskets by choosing sunglasses from Gucci, Christian Dior, Ralph Lauren and Valentino; watches by Coach and beauty treatments from Ole Henricksen Spa. “Rock stars especially go crazy for the sunglasses,” Wood says. “And they have the type of job where they can wear a different pair every day.”
Among the other goodies Wood places in the baskets are Palm Pilots, cameras, Natori lingerie and Stuart Weitzman shoes. (“I picked those for Jenna Elfman because I know she loves [them].”)
A former talent coordinator for the Grammys, Emmys and MTV Awards, Wood decided to combine her backstage expertise with her mania for shopping two years ago. “If I see something interesting when I’m traveling, like hand-carved chopsticks or a new makeup line, I try and get it in the baskets,” she says. “I get a kick out of seeing performers get their gifts,” Woods adds. “At the Billboard awards, Ricky Martin just tore through his basket before going on stage. it’s amazing how excited celebrities get over free things.”

Wood plans to bring her gifting lounge to this year’s Billboard Music Awards and American Music Awards, and eventually, to the Golden Globes and the Oscars.”I’m a shopaholic, so this is another way for me to indulge in it all day and all night long,” she explains. Now I just need to partner with a great restaurant so we can have more than the canned sodas.”